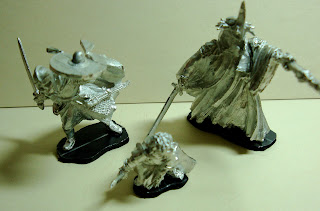 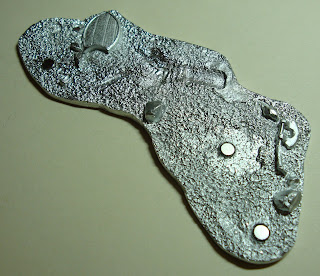 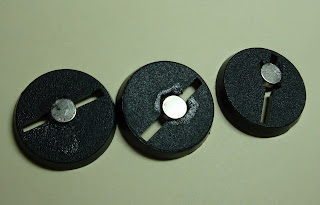 I'm painting some Lord of the Rings figures for a charity auction at The Gathering in the Desert, an Indy GT for LotR held in Phoenix. You can find out more at http://www.adeptusarizona.com/blog/?page_id=51.
I decided to do the diorama "No man can kill me". I wanted to make the figures usable both in the diorama and for regular game play so I decided to try using magnets as show here. The round silver magnets come from "Amazing Magnets" (http://www.amazingmagnets.com/) and the black metal strips I purchased at Michael's Craft Store. The nice thing about the strip magnets is they can easily be cut to any size and shape you need. The idea is that the strip magnet will allow the model to attach to either a standard round gaming base OR the diorama base without being permanently fixed to these.
Now I need to get cutting on painting these three to meet my February deadline!
Posted by Jamie at 11:45 PM No comments: 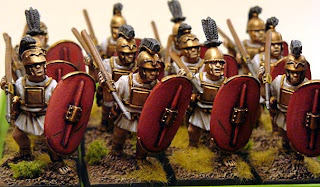 It took me a but longer to finish my first unit let alone get some good pics of it. But, after much delay here it is.
I have to take a short break to do some commission work but I hope to have another 12 Hastati done before Christmas. I like to think of it as an early Christmas present for Hank. :)
Posted by Jamie at 3:33 PM 1 comment: 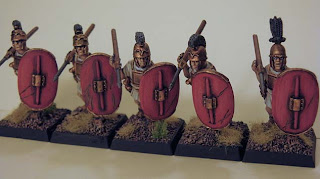 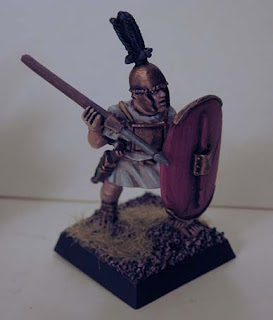 I am thrilled with the speed at which this first unit is coming along. I have finished 5 models in about a week which is lightening speed for me. I have gone with a very basic painting scheme. Basecoat colors (off white, red, flesh and bronze) followed by a wash of GW Badab Black on the metal and Devlun Mud on everything else. Then, I reapply the basecoat color, add a highlight and that is it. Simple but I think it still looks pretty good.
At this rate, I should have my first unit of 12 done in another week!
Posted by Jamie at 2:23 PM No comments:

The Rise of the Republic 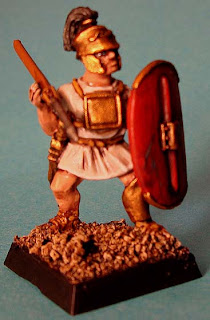 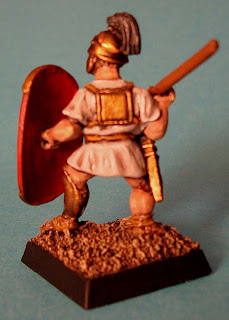 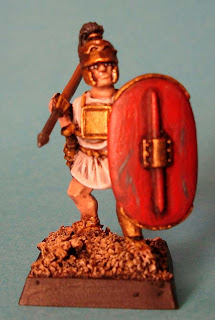 Adepticon 2009 is just 5 months away so it was high time I started my 1000 points of Republican Romans for the WAB Team Tournament. Here is the first of many Hastati models I will be completing in the coming months. These proud citizens of Rome will take the field alongside the mercenary menace of Dave Pauwels' Carthaginians. You can follow the progress of his army on his blog at http://www.rabidbatstudio.blogspot.com/.

One down, four to go! 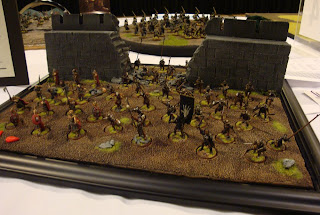 It's been a while but the time off has been put to good use. I've completed my Uruk-hai army for the Chicago GT. I took my existing force of about 300 points and added an additional 300 points in the form of 17 figures. These included some Uruk-hai crossbows, Dunlending warriors and an Uruk-hai Shaman. 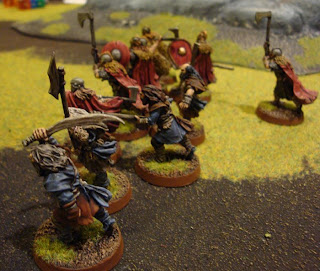 So, army number one is done. Next, I'll be moving on to army number two: My Republican Romans. Check back soon for my first pics of this new army.
Posted by Jamie at 7:13 PM No comments: 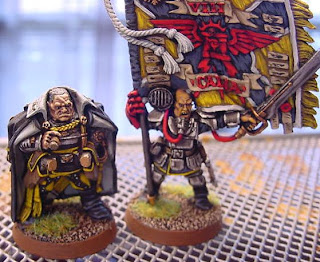 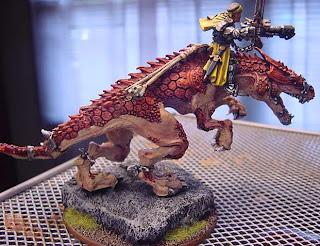 I've finished my last commission project so I can finally get started on my own army painting! Here are some pics of the three recent commission models I finished. Now it's time to get cracking on my Chicago GT army. 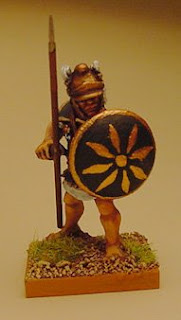 It's been awhile since I updated my blog but I have been a busy man. During the past two weeks I completed a second unit for my friend's historical army. I really like the way these guys came out and the color scheme was really easy to paint. I've been using the GW washes on both of the units I've done recently and I've been very happy with the effect. I now have a better idea of how I might use them on the LotR stuff I need to do next.
Posted by Jamie at 9:07 AM No comments:

Macedonians on the March 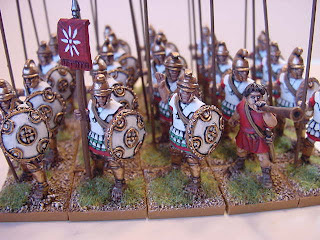 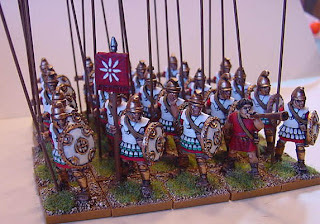 I finally completed the first of two units for Hank's Macedonian army. This unit painted up incredibly quick and I got to test out some of the new GW washes in the process. In particular, I used the Badab Black as an armour wash on the bronze by applying it over a bronze basecoat and then re-highlighting with the bronze afterwards. The other wash I used was the Gryphon Sepia as a flesh wash. I basecoated with Tallaran Flesh and then did one highlight of Elf flesh before applying the wash as my final step. I also used the Devlin Mud wash over the red on the musicians tunic. Again, two base colors (basecoat and highlight) followed by the wash as the final step. Now on to unit number two!
Posted by Jamie at 10:14 AM 1 comment:

Hail to the Eye! 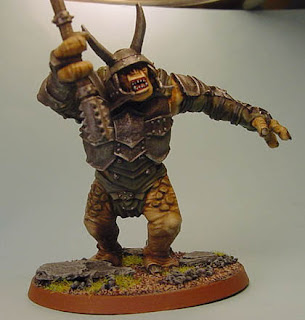 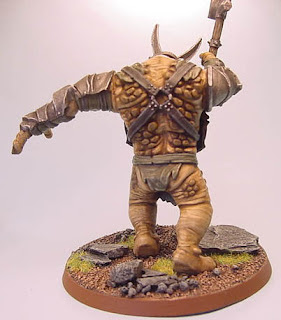 I painted this new plastic Mordor Troll a few weeks back for the Orland Park GW store. The model is really nice and I was happy with the final look of the model even though I was under a time crunch to get it completed. I've never had much interest in painting a Mordor force but after painting this model and looking at the new army book I think I may have to reconsider that. 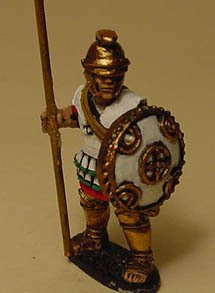 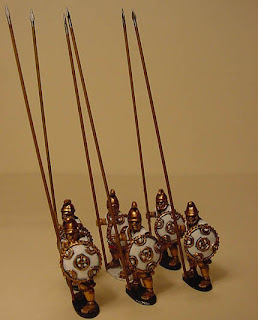 Another side project I need to complete before embarking on my own armies are some Macedonians. These are for a friend who is feverishly trying to get 4000 points ready for a trip to Historicon in July.
So, 6 down, 22 more to go! 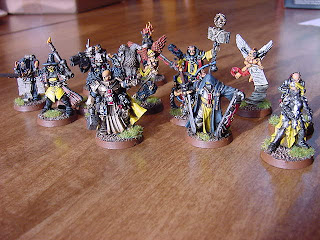 Painting 5 armies in 2 years may seem like nothing to some people but one of my problems are the little distractions that come up. Here are some pics of one of those distractions. I've been painting Imperial Guard and Inquisitor figures on commission for a friend off and on for several years. This is the most recent batch of figures I just finished. 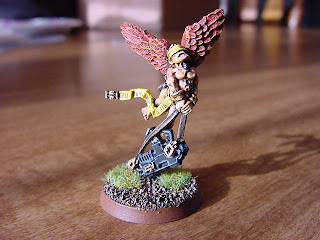 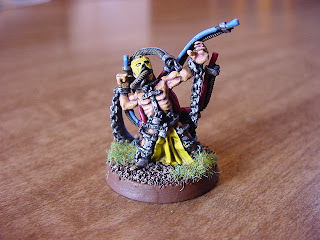 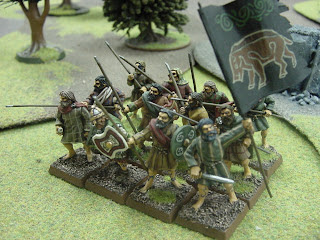 So, here's the crazy plan. I'm ready to finally get some complete armies painted. With that in mind, I've set myself the goal of completing 5 armies by July 4th of 2010. First on the list will by my Uruk-hai army for the 2008 Chicago GT. This one is kind of cheating as I already have more than half the models done. Second on the list will be 1000 points of Republican Romans for Warhammer Ancient Battles (WAB) After this, I plan to complete 1000 points of Ancient Picts for WAB. Then, by next Fall I need to complete another Lord of the Rings (LotR) army which I plan to be my Hobbits of the Battle of Bywater force. Then, it will be time to finish 1000 points of each of the WAB armies (Romans and Picts) and then do one more LotR force by 2010.

But before I can do all that I have some loose ends to tie up. First is a batch of Warhammer 40k Catachans and Inquisitor models I'm working on for a friend. Second will be a unit of 28 Macedonian Pike which I'm doing to help my buddies Dave and Hank complete a team army for Historicon. Since I can't be there in person I can be there in spirit.