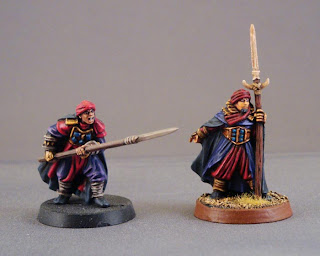 So here is where it begins. Although I failed to complete anything close to my required models for month 1 of the Tale of Four Gamers, I did do SOME work. The two painted models above were my test models for my Haradrim army from before the start of the project. So, technically, I have two models done! Below is the actual initial models I slated to finish in month 1. I still have a few bow strings to add and need to base my captain but this will be my initial group of models when I finally get some time to paint them. The bow strings are thin jewelry wire from a craft store. I cut and wrap these around the bow and then use super glue to hold them in place while I attach the other end to the opposite side of the bow. For the bows pulled to the ready, I cut two pieces, wrap each around the bow and then glue to loose piece to the hand. Once primed and painted it all looks pretty good.

So, although I have a lot on the hobby plate at the moment, I still hold out hope that I can finish my army by AdeptiCon 2012. If not, I'll certainly have a head start on my force for Bilbo's Birthday Bash 2012.

The Guns of April

I've always been intrigued by the Napoleonic era and particularly the uniforms of the period but have never really know much about the conflict. I've toyed with painting a few figs for fun but the thought of painting the required numbers of models in 28mm scale always put me off from any real endeavour into the period. Well, my friend Dave Pauwels knows me to well so when he started tossing around ideas for a historical big game to run at Adepticon 2012 he of course brought up the idea of a Napoleonic battle. Not only that, but he suggested teaming up with the likes of Joe Krone, Dave Taylor and Brien Dulaney to do this project. Well, he had me at "You have to paint the British".

The result of this crazy idea has now taken virtual form in our new project blog "The Guns of April" (http://gunsofapril.blogspot.com/). Put together by the capable hands of Dave Taylor, the blog will detail our efforts to assemble and paint models to represent the 1812 Battle of Salamanca which we will re-play at Adepticon 2012. You can find more details at that blog along with updates from all sides. For my part, I will be working alongside Mr. Taylor to add to his already significant British force. As I do my part, I will make sure to post updates here on my blog along with posts to the Guns of April blog as well.

So stay tuned for some British Line Infantry soon!
Posted by Jamie at 11:21 AM 4 comments:

Well, October has rolled around and I managed to get my figures together with the exception of a few bow strings. But, I failed to even prime my models! Epic fail on my part, which thus explains the title for this post. As if September wasn't a bad painting month for me, the next few don't look promising either. Add to this the fact that I have some other projects that are calling which may further put my Harad on the back burner. So, keep checking back as I will post pics of the Harad stuff I do complete but I'm pretty sure I know where I'll finish in this race. :)
Posted by Jamie at 11:16 AM No comments: