The High Tide of the Confederacy

Our Guns of April game for 2013, Gettysburg, was a fantastic event and you can see a quick recap of the game over at the Guns of April blog.  I also have some shots of my own forces in action from that game and will try and get those up either here or on the Guns of April site in the near future.  Although the game was called as a minor Union victory, my pride still won't accept this fact.

All joking aside, this was another great project and I was thrilled by how much I was able to get done.  I fell short by one stand (a horse holder) to use when my cavalry dismounted, which it turns out, never did anyway!

So below are shots of the finished force I painted for the event.  Knowing I could get this together has given me hope of not only adding more confederates but starting on a Union counterpart to this force.  Only time will tell. 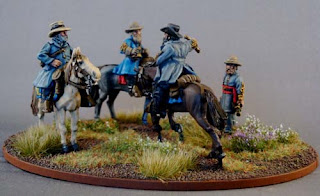 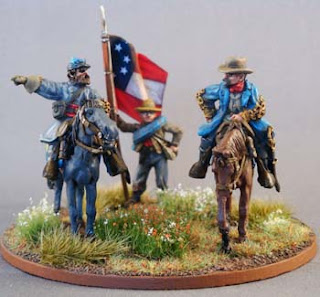 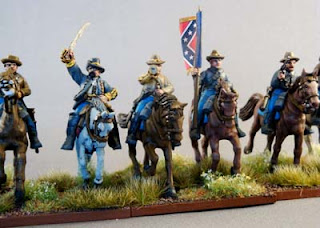 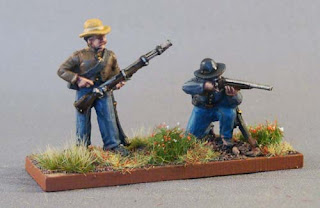 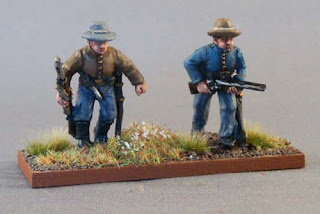 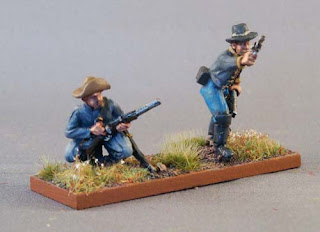 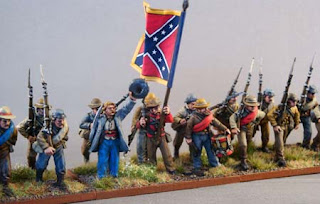 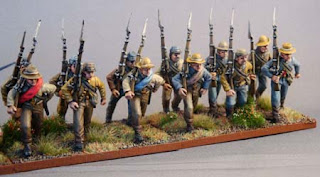 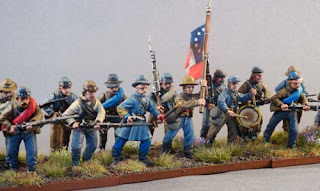 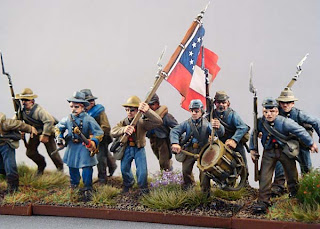 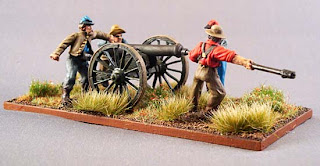 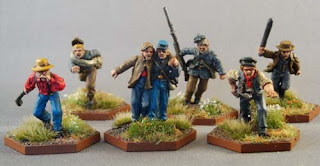 I've been doing more historical gaming with a local group of gamers and really enjoying a different aspect to miniature games as a result.  I've always worked on projects for a tournament or maybe with a couple of friends but due to gamer ADHD I never get much done and thus my dreams of some epic battle with tons of figures stays just a dream.

Not so with this group.  These guys have made the dream of an EPIC battle a reality by collecting a huge number of figures, usually for both sides of a conflict.  Playing in their games is great as I get to see huge armies on the field, push some figures around and have a great time with some great guys.  Best thing is, I don't have to bring a thing to participate as they have all the figures!

My most recent game with the group was an Ancients battle put on by our friend Mike.  He had his Republican Romans vs. various Italian Tribes.  Not only did it look great but I had the pleasure of seeing a LOT of our Gorgon Studios Etruscans on the field.  Really an inspiration for me and maybe someday I can get something half as large an army painted up. 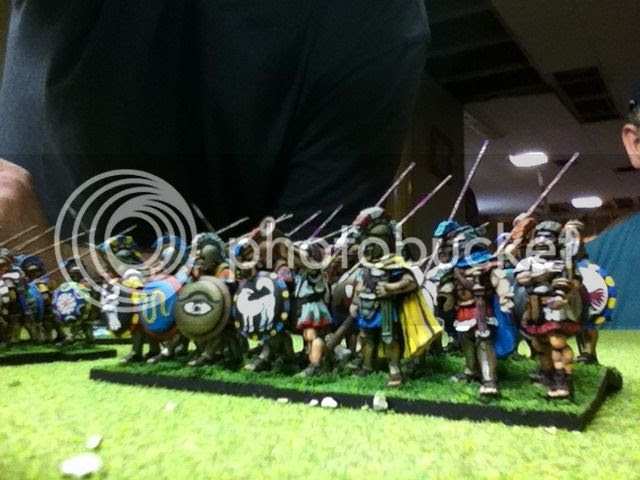 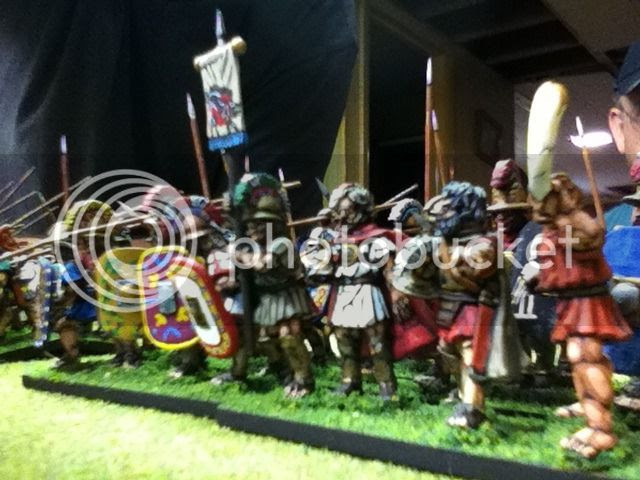 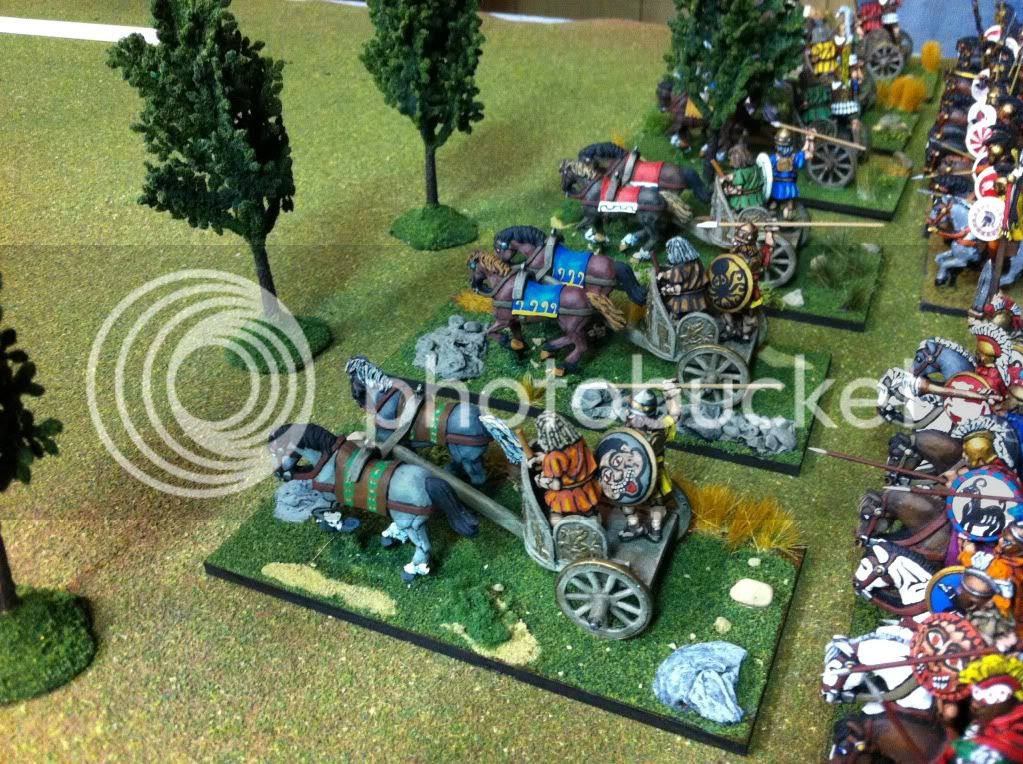 Etruscan Chariot and Cavalry (Gorgon Studios)
My count showed over 500 figures on the table which is something I've rarely had the pleasure of seeing in person.  We used the Impetus ruleset that the group (besides myself) are familiar with.  It appears to be a fairly "basic" ruleset which, although maybe not be as flexible in tactical variety, makes for a quick, easy game that anyone can play.  For me, I just want to see some cool models, roll some dice and have some laughs so simple is fine by me. 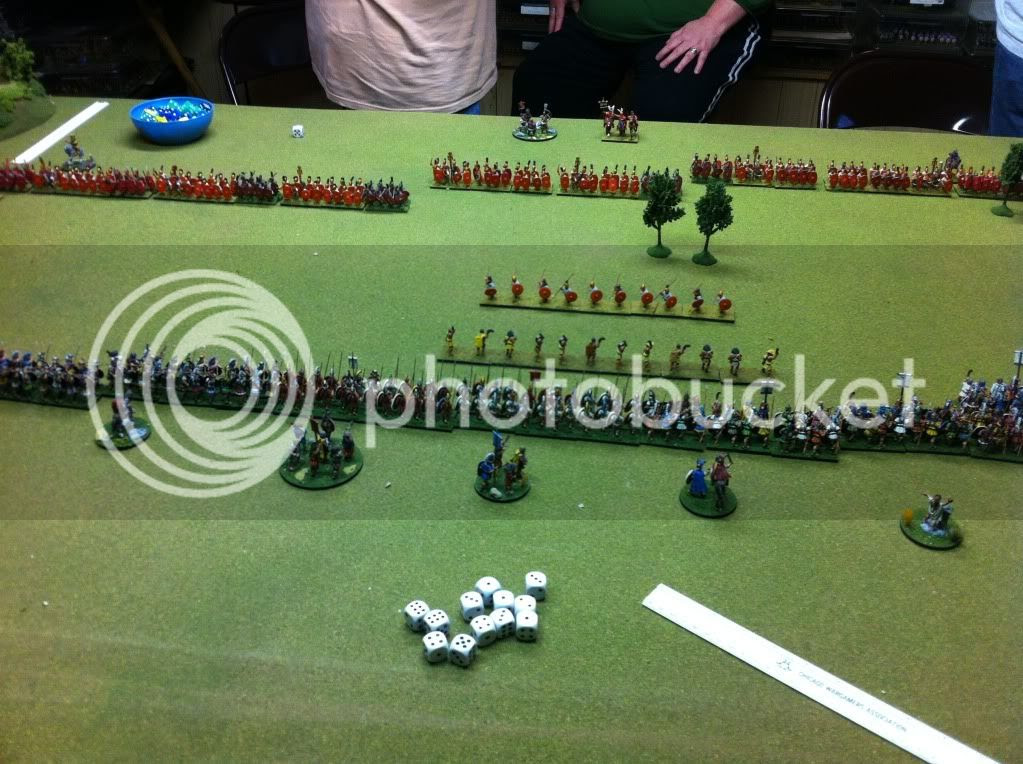 I rolled off and won the chance to play on the Italian side against the Romans.  The two armies lined up, our skirmishers scuffled in the middle and our cavalry forces clashed together on our right flank.  The chariots were quickly dispatched by the Roman cavalry but Wendel, our cavalry commander, managed to hold up the Roman's left flank nearly the entire game.  This bought the rest of us, commanding the infantry, time to advance on the Romans and hopefully finish off enough of their infantry that the cavalry clash wouldn't matter.
﻿ 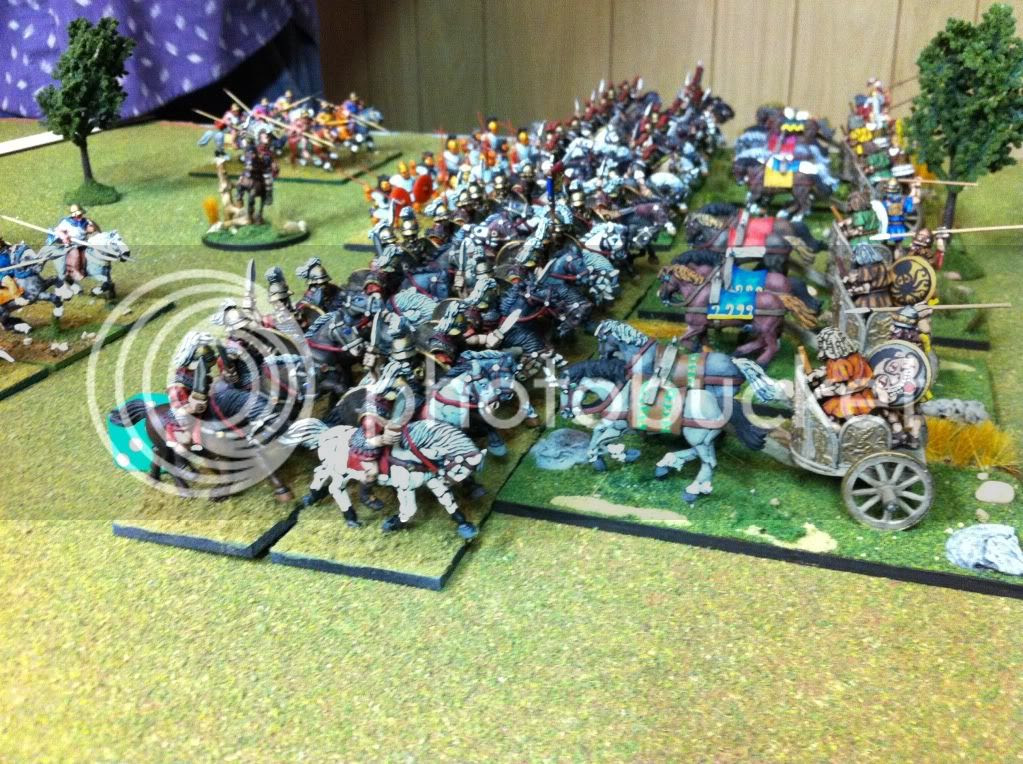 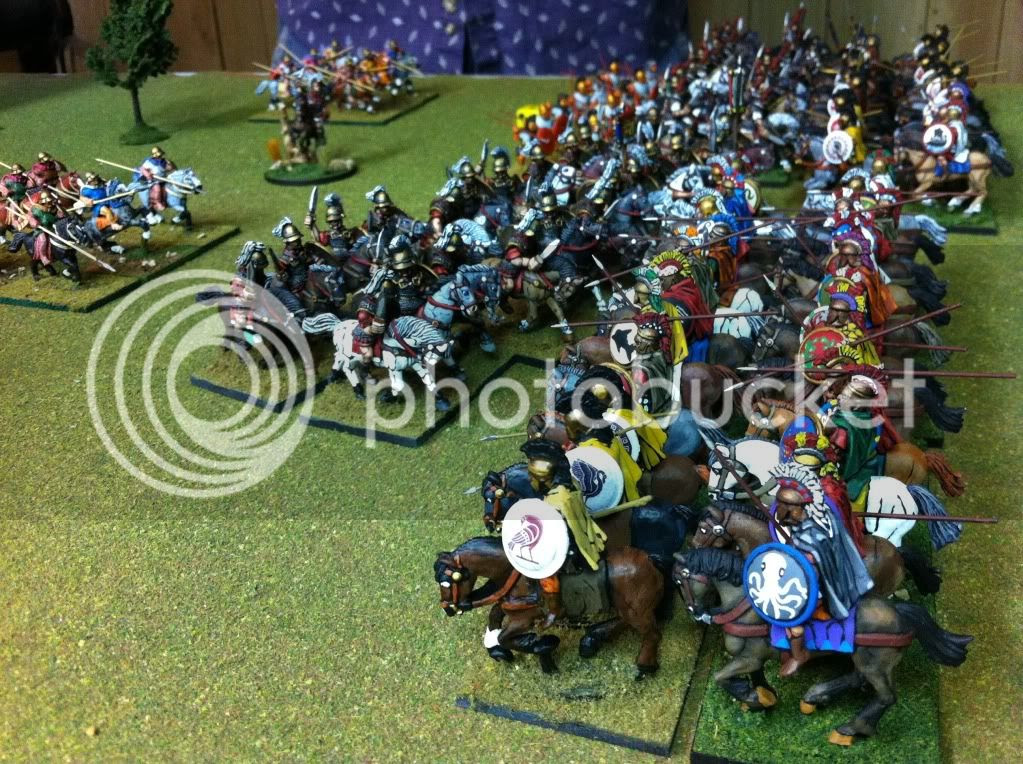 Although my slingers drove off the Roman skirmishers they failed to do much damage to the Hastati beyond and were quickly driven off as well.  So after several turns our infantry lines collided and although our rolls were good the Roman's were better.  I've never seen so many 6's rolled for pilum throws than I saw in the first couple of rounds of combats, which took a nasty toll on our Italians. 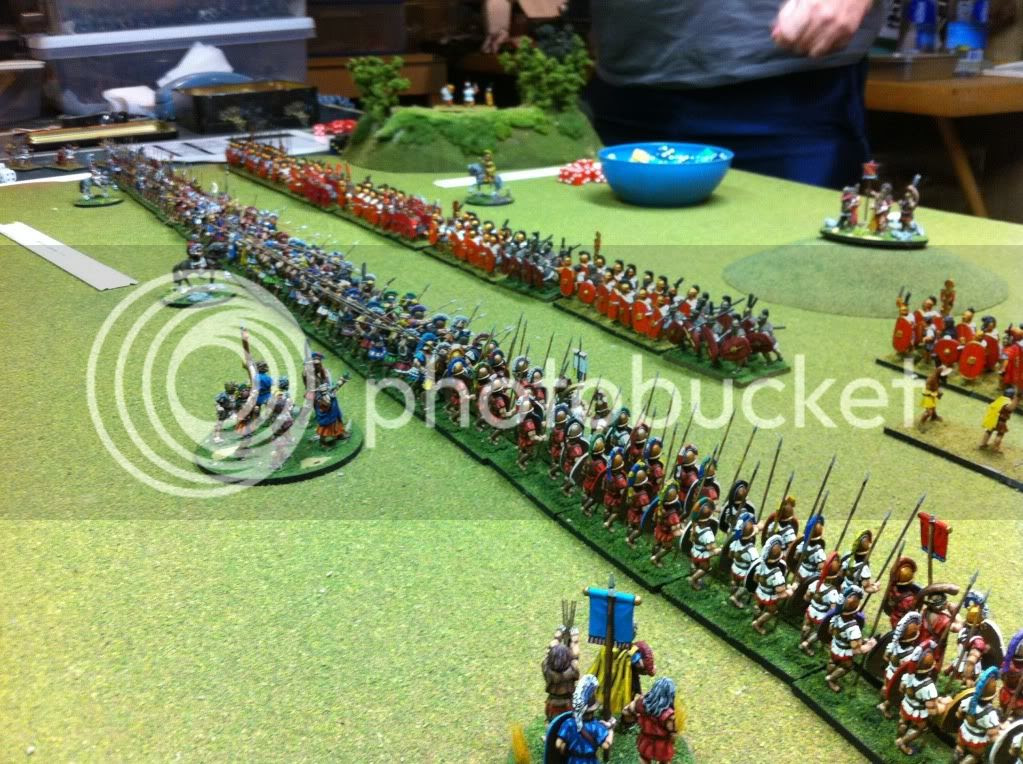 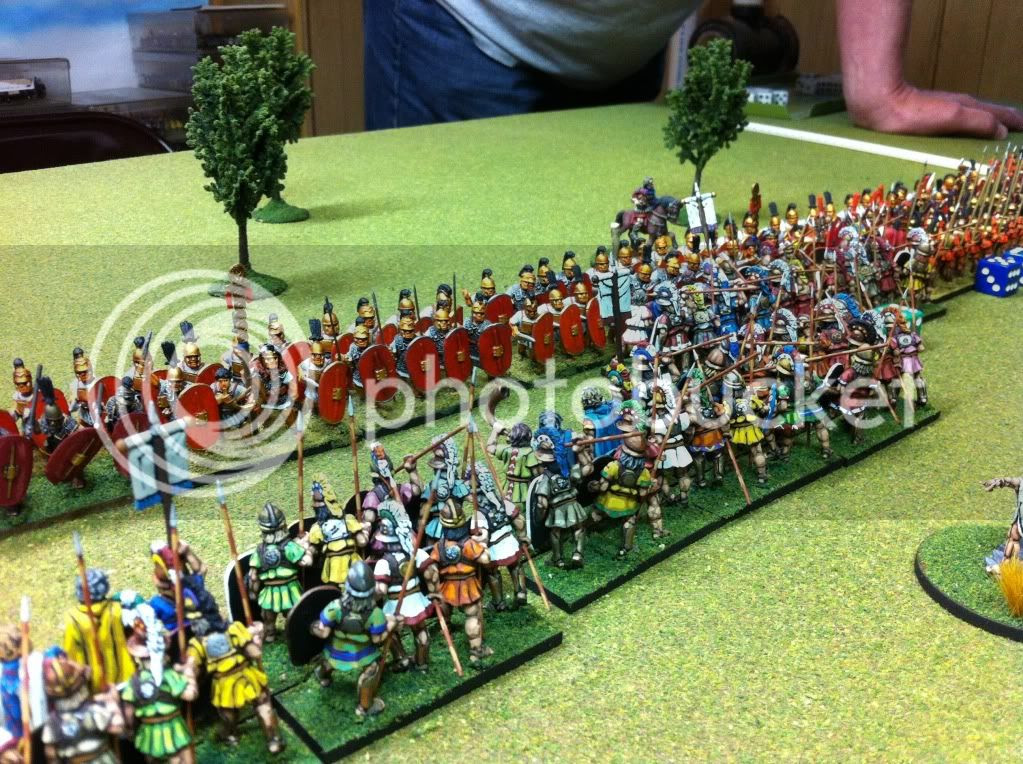 In the final round both forces were within one unit of breaking.  Wendel's cavalry had bought us enough time to finish them but sadly we came up just short and managed to fail the one leadership check that lost us the final unit and the game.  So, the Romans eked out a win but just barely.
It was a great game despite our loss and it left me inspired to finish my Republican Romans (the same minis from Crusader that Mike used in the game) and then work on an opposing force in the form of our Gorgon Studios Etruscans.  If I could get 100 figures in each force someday I'd be happy.  500+ will probably never happen for me, but one can dream.
Posted by Jamie at 7:52 AM 2 comments:

Bilbo's Birthday Bash 2013: All In The Family

Once inspiration hit for my monster list for the evil force at this year's B3 tournament, I quickly knew what I would use to oppose them as my good force: Elves.  I wanted something small and with the Elves I figured I could spend the time painting the models rather than busting through lots of rank and file. 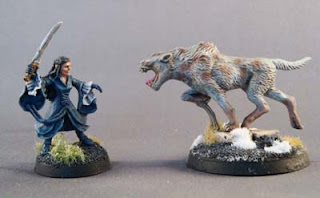 I had envisioned doing a White Council force since I have all of the models and it would be a great excuse to paint them up.  After some soul searching (and number crunching) I decided to make it all Elves and to try and make it a family affair of sorts.  Galadriel seems a given and Celeborn wouldn't be far behind (I think we know who wears the pants in that relationship).  I've always enjoyed the fact that, reading the Lord of the Rings appendices, you realize that Elrond is the son-in-law to Galadriel and thus Arwen is Galadriel's grandaughter.  So I had to add them in for that fact alone not to mention that Elrond (and Hugo Weaving) is one of my favorite characters in the movies. 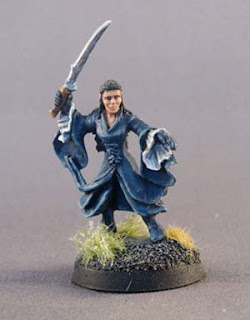 The other two Elves I chose are Cirdan and Glorfindel.  Both are models I've wanted to paint and Cirdan has always been an intriguing character to me when reading the various books outside the direct Lord of the Rings trilogy.  Both are also tied to the House of Elrond either directly as in the case of Glorfindel or indirectly in Cirdan's case. 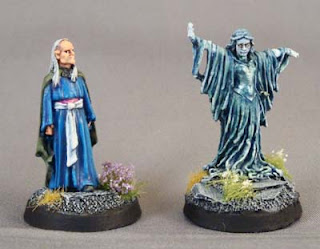 In keeping with the theme I had for the evil force, I decided to base these in the same way (rock bases with dead grass) but replace the snow with flowers.  The thought being that the power of the Elves (such as Galadriel in Lothlorien) is able to combat the corrupting effect of Sauron's evil. 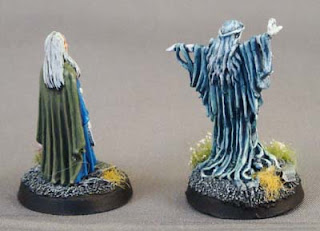 This force is going to be feast or famine when it comes to games.  Since I don't care much about wins I'm ok with that, I only hope I can give my opponents a challenge before I get whopped.  These Elves have a lot of magic and some tough combat characters (Elrond, Celeborn and Glorfindel) so I think they may present a non-traditional challenge both to me and my opponents.

5 months until B3 and I'm already half way done with my good force.  I like building small armies!﻿
﻿
Posted by Jamie at 3:27 PM 2 comments: