After finishing my Lord of the Rings Dwarven army a couple of years ago I've not had the motivation to get started on a new force.  That changed with last years B3 tournament as I was totally inspired by the great armies I saw on display. That, coupled with every game going to full time made me certain that I needed a smaller force.  I lose way more than I win and using Dwarves and Minas Tirith seemed to often prolong the inevitable and make me miss out on the fun downtime you often get at tournaments.

One of the forces I faced was a cool monster themed list with spiders, bats and dwellers.  I had always envisioned doing a monster list from Angmar but after some suggestions from Johnathan (the owner of the monster list I faced) I decided on basing it from the Moria list and using the two special character goblins that work well with monsters (Ashrak and Druzhag).  With the move to 750 points for this year I had to slightly tweak my list by adding some "ghosts" in the form of Barrow Wights and Spectres from the Angmar list (I'm trying to use the models I own and not purchase more).

My first model for my evil force is a wild warg.  In an attempt to match my Dwarves bases and to adhere to a theme of decline/death/winter for the corrupting evil force I went with a rocky base containing dead grasses and snow.  My inspiration for the decay theme came from the recent Hobbit film and the way they portray the evil and corrupting effects of The Necromancer on the forest of Mirkwood. 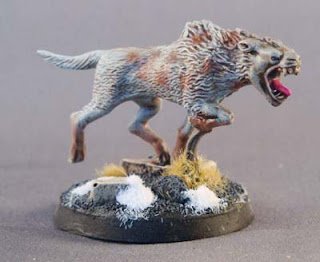 My final force will be a combination of creatures including wargs, spiders, bats, and a cave troll all lead by the goblin heroes and the Spider Queen.  Allied in will be some Barrow Wights and Spectres representing some of the non-animal creatures in the Dark Lord's service.
I'm not going to the extreme lengths that some of my fellow Lord of the Rings friends are
(i.e. check out the FUBAD group at one of the member's blogs: http://chefofwar.blogspot.com/)
Yet, I have used this project as a chance to try some small things I've always thought looked cool.  One is to sculpt the bases a bit so they have that raised look to them. I've seen this done by lots of folks and even with basic sand and flock it always looks cool.  In my case I also added slate and other large rocks plus bits of terrain blocks for elevation. 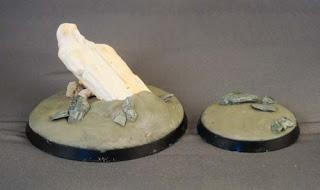 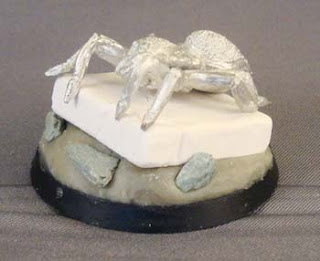 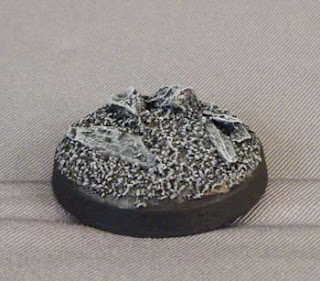 So that is the start and I have 5 months to pull it together.  Of course, this is only one of the two armies I will need to field.  What force will oppose the spread of this evil in the wilds of Middle-earth?
Stay tuned.﻿
﻿
﻿
Posted by Jamie at 7:35 PM 1 comment:

The AWC Lord of the Rings club couldn't let Adepticon pass without showcasing The Hobbit SBG game by running some demo games.  Although the new movie and game release haven't generated the gaming interest I'd hoped we still had a nice crowd of players each day. 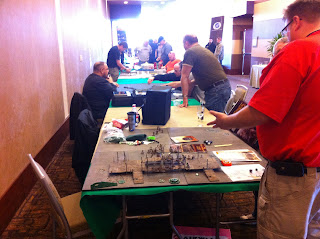 A big thank you to Tyler and Kyle for running the demo table on Saturday and Sunday.  As well as a big thanks for all those who helped preparing the miniatures and terrain (Chris B, Tyler, Kyle, Chris T. and Tim). 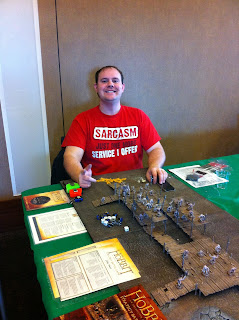 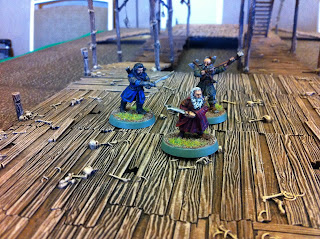 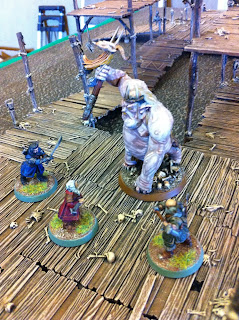 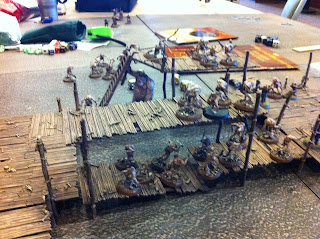 I also really wanted to run an Old West game using the Legends of the Old West rules and featuring some of the old west models from our miniature range at Gorgon Studios. I had big plans for a mini-campaign style game involving 4 posses and two different scenarios played in series.  Unfortunately, I had one registration total and that person never showed up.  But getting it all setup wasn't a total loss as two of the "Edley boys" and their cousin came over and played. Next year I may try a night game as I think a Saturday morning game conflicted with to many other events and tournaments. 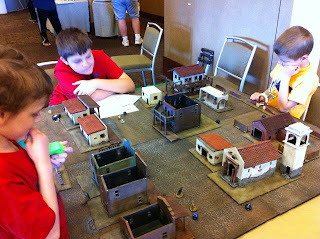 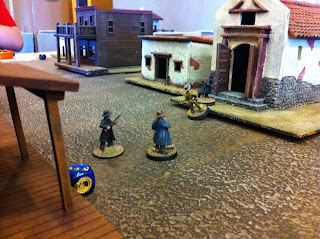 The really disappointing thing for me was that I had a wonderful piece of terrain commissioned by my friend Jeremy over at Wyrd Hobby Services that we never had the chance to use.  Rest assured, this will definitely be used the next time I run a game. 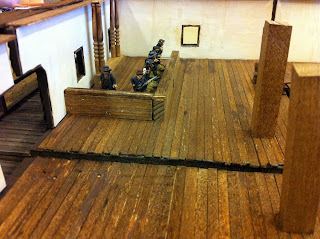 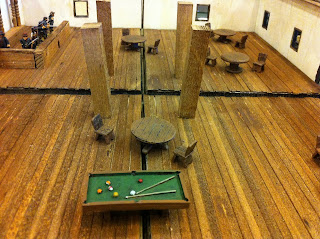 We interrupt this regulalry scheduled blog.....

.....to bring you an important message about an awesome Kickstarter project:


I had a chance to play a demo of this at Adepticon and the company was also giving away a free Zentradi figure each day in the vendor hall.  As if they didn't already have me at "Robotech", the coolest sci-fi/anime/soap opera a 12 year old had ever seen, the free fig and the fun demo was enough.

Myself and a friend are in on this and set to get tons of bonus stuff thanks to the overwhelming support they have gotten on kickstarter.  Yet, with 5 more days left there are still plenty of chances to join in.  Not only are the models and background great but if you get in at the right level (Battle Cry and above) you will be getting a ton of great stuff at an incredible price.

And now, back to your regularly scheduled blog posts.
Posted by Jamie at 6:36 AM No comments:

Adepticon: Lord of the Rings

With the release of the Hobbit SBG rulebook last winter our small group of LotR players had a shot of new excitement about the game we love.  I'll leave to analyses of GW and it's sale strategies to others but let me say I'm just happy to still be able to play the game and use the models I have as the new stuff is a bit rich for my blood.

The original plan was to have Brent Sinclair run his "March to Mount Doom" event on Thursday night, the Team Tournament on Friday and some Hobbit demos on Saturday and Sunday.  All these events either came very close to selling out or sold out and had spots added so I was very pleased with that.  We were also fortunate to get some new Hobbit product thanks to the Adepticon sponsor team and the wonderful retailers that support the convention (not GW, but lots of OTHER retailers). 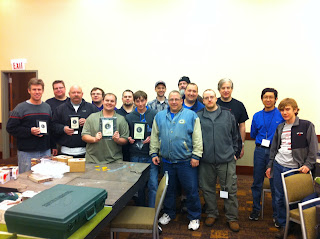 Here is the cast of characters who turned out for the Team Tournament on Saturday.
Below are some shots of the armies and players from that day.  It was an awesome event to run and I want to thank all of the attendees for making it such a great day. 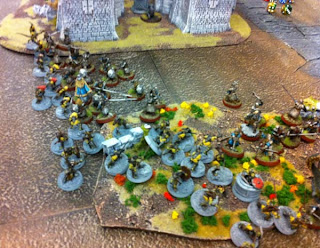 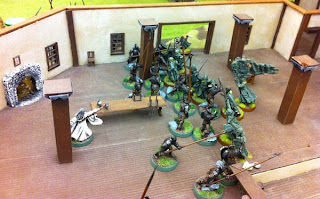 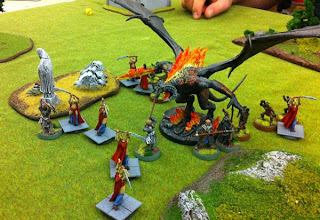 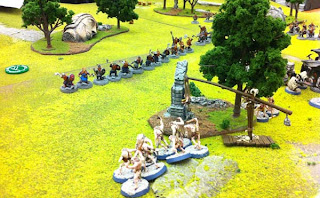 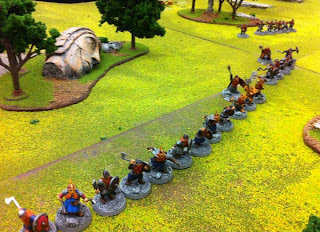 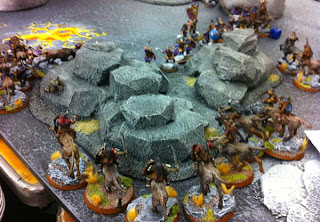 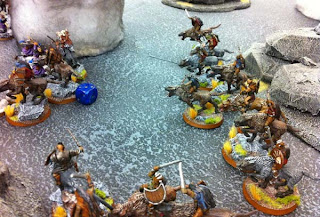 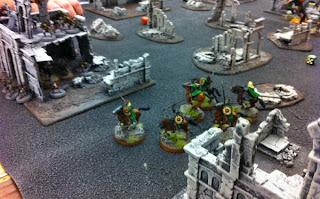 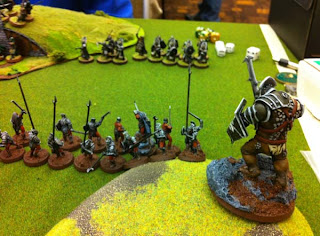 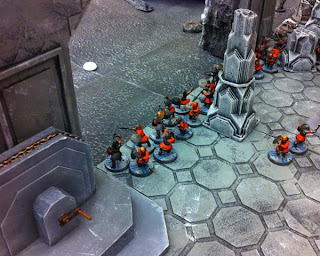 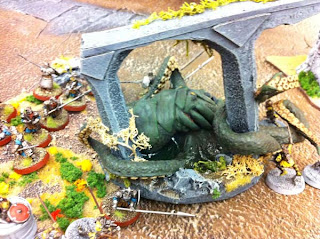 April is always a crazy time of year for me between work, family and gaming conventions.  So, now that I have a chance to recupperate I thought I'd share some highlights from the awesome game convention that is Adepticon.

First up, with Adepticon moving to a Thursday start I decided to use that as an opportunity to do some gaming, since I wasn't scheduled to run anything until Friday.  The one downside to this convention is that there is so much to do and not enough time to do it in, although that's not really a bad thing is it?  Couple that with helping to run events or setup and there is even less time to play.  My contribution is small but others do far more than me and I need to point out the extraordinary efforts some of the organizers and staff go to to make Adepticon what it is.  A big thanks to the organizers and staff that spend countless, often thankless hours, prior to and during Adepticon to make it happen.  It's only thanks to those dedicated volunteers that Adepticon is the great convention it is.

Enough of the Adepticon love fest then.....

I had the chance to sign up for "The Battle of Little Bighorn" game put on by a great guy and friend, Merle Delinger.  I've seen him run this the past couple of years and I've always wanted to play in it.

Merle uses the Old West rules and Blood on the Plains supplement for this game.  It involves several Native American contigents, one led by Crazy Horse and two Federal Cavalry contingents.  One of these is deployed on table and led by George Custer himself.  The other is all mounted releif force that arrives later as a reserve. 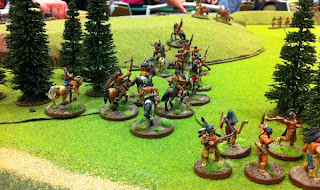 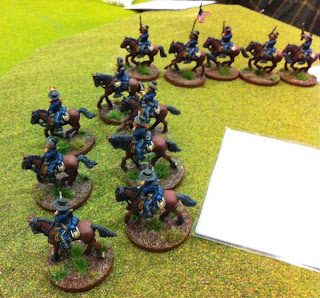 I decided I was feeling anti-government so chose to play as the Native Americans.  It was a fun game and all five of us playing had a great time.  Even though the reserve force game on first turn we managed to hold them up while Crazy Horse surrounded and finished off Custer. A victory for our side! 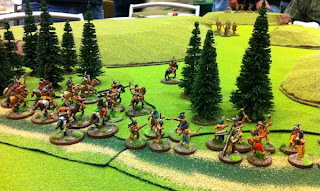 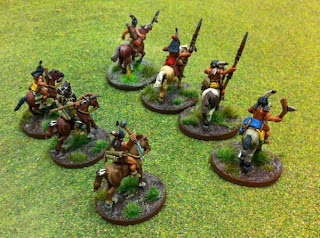 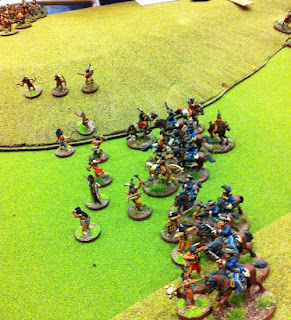