Fallschirmjager vs. US Infantry

This past weekend I had the chance to take my Fallschirmjager out for their first game of Flames of War against my friend Tyler's Americans. It was a great game and we already have another planned for this week. Below are a few pics of the action. I found that, not really understanding all the rules, I played my Fallschirmjager pretty defensively and when I did assault I was to spread out to be effective. The air support I had was fun but failed to really do much of anything. My standouts were my armour, especially my Marder II's. These guys took out a whole platoon of tank destroyers. I'm definitely getting 2 more of these! My Tiger did alright but I realized by the end of the game that I should have just kept him in place to fire as he would have been more effective.

The famed Luftwaffe seemed off their game this time around....but they still looked cool trying!

My Tiger I E taking out some Shermans.

The stars of the game, the Marder II's!

My Fallschirmjager hiding from the American tanks.
Posted by Jamie at 6:58 AM 1 comment: 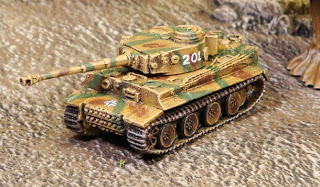 Since my last post I've been busy with summer trips and other non-gaming activities. But, with my first game using my Fallschirmjager coming soon I got back to finishing up my force for the big debut game. With my Fallschirmjager company completed it was time to move on to some armoured support including two Marder II's and a Tiger I E which is pictured here. The Marder's are getting their final touches and I'll get some pictures up soon along with a battle report from my first game with the new force. 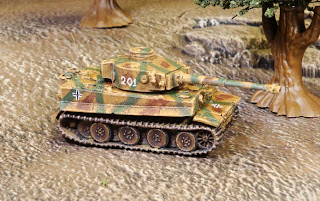