With my foray back into 40k I'm using the opportunity to take a single army (Imperial Guard) and make it work for several projects at once.  Given my lack of speed when it comes to painting, this will get me closer to having an army for multiple gaming groups with less time and effort.

In the last post you saw the start of my Badab War project.  Today I give you the first of a couple of models that will be used for my Kill Zone team as well as a general IG army for friendly games of 40k. 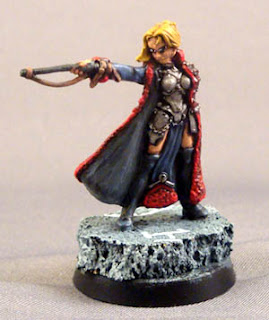 This is an Adepticon model from a few years back (I think 2008) and thought it worked well for my Kill Zone team as it was a bit "different".  I plan to use her as a Commissar (equal rights for women in the Imperium I say!) 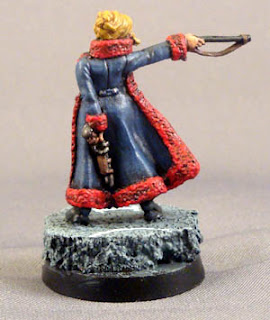 So there you have it.  A couple of models switched and I can go from traitorous Tyrant Legionnaires to loyal Imperial soldiers in no time at all.  Stay tuned as I work on both more IG for Badab and a Kill Zone addition that has become an unplanned homage to a different Empire in a different galaxy.
Posted by Jamie at 7:42 AM 1 comment:

I've been pulled back into 40k in a big way.  First, it was a group of fellow gamers looking to do Kill Zone (I'd only have to do 10 figs).  Then it was a good friend putting together a fantastic group of hobbyists and gamers to recreate the Badab War from the Forge World Imperial Armour 9 and 10 books.  Finally, the release of 6th edition, the fantastic starter box minis and the new allies rule sealed to deal.

So I've been slowly working on my Imperial Guard which will serve double duty as my Kill Zone team and the base of my Badab War project: The Tyrant's Legion.  For those who don't know the history, the Astral Claws Space Marine Chapter, led by Lugft Huron (aka. Huron Blackheart, aka, Tyrant of Badab) stopped sending their tithes back to the Administratum and this incurred the wrath of the Imperium in the form of several Space Marine Chapters sent to put the Astral Claws to task for their transgressions.  My favorite thing about the Badab War is that Huron had built a defense force for the sector based strongly on the same format as the pre-heresy forces of the Imperium.  So, Imperial Guard units (mostly Planetary Defense Forces) where commanded by a Space Marine and served alongside Astral Claw units.  These Guard didn't know they were part of a secessionist force.  They were loyal soldiers and in their minds they were doing what their lord, and thus the Imperium, asked of them. From that perspective, the attacking Imperial forces were enemies and traitors and the Badab forces were on the right side.  By the end they realized the error of this loyalty when they fought alongside renegade marauder units they had formally fought against to secure the sector.

The great thing is I not only get to paint guard but I also get to include Astral Claw elements AND chaos elements in the form of Renegade Marauders.  When I saw the contents of the Dark Vengeance starter set I quickly realized all 20 Chaos Cultists would work perfectly as Renegade units in this Badab force and might serve as the basis of a future Chaos force.  Ever since reading the Fulgrim novel my opinion of Slaneesh has changed and is now the most disturbing and frightening chaos god in my opinion.  With that, and the chance to paint pink for the first time in my miniature paining history, I had to make my Marauders cultists of Slaneesh.

Below are some shots of the Badab force so far (yes, I have a LOT more guard to paint) including the Astral Claws Centurion that will lead the force. I'm hoping to get my first 500 points ready for a game in December so check back for progress updates as I go.

Centurion and IG Command (so far) 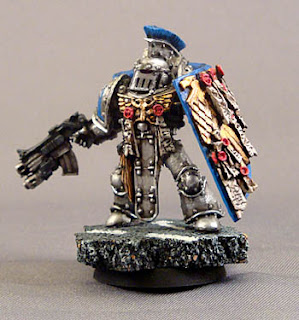 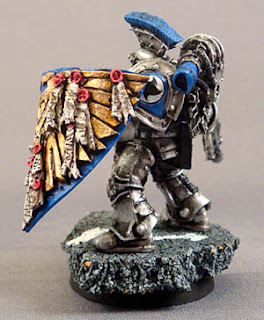 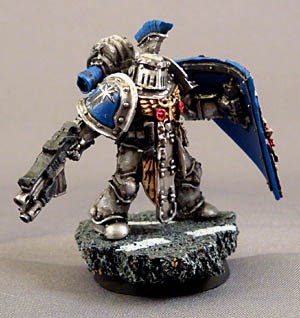 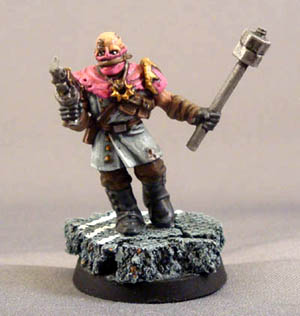 My first Marauder.  This is one of the models
from the Dark Vengeance box 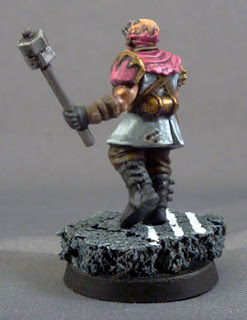 I couldn't resist the chance to paint pink!