What have I gotten myself into this time?

So, the past year or more I've been very down on GW and had decided to spend my hobby money elsewhere like FOW, Historicals, etc.  Essentially, I felt that I would not buy anything model wise from GW until the Hobbit release (I already have enough Lord of the Rings stuff to keep me busy for several years anyway).  And then I had to wander through the bitz trading at Adepticon (why I don't know) and felt compelled to haggle over the Cadian Battleforce box (new in box) which after getting him down to roughly 50% off I felt obligated to buy.

It must have been fate because it turns out a number of different gamers I know and sometimes game with are looking to start both Kill Zone and a Badab War campaign.  I only found this out the day after buying this box!  So below is the start of my combination Kill Zone Team and Badab Sector Planetary Defense Auxila.  I wanted to do something different and more prestine, plus I'm feeling like painting some blue.  Although the initial force will be pretty generic I'm basing the theme around the Guard Auxila that fought for Huron Blackheart in the Badab Sector during the Badab War.  These poor bastards thought they were protecting their sector and homeworlds from a traitorous Imperium and Space Marines when in fact, they were the ones who at unwittingly turned from the Imperium by blindly following Huron and the Astral Claws.  If things do take off with the Badab Campaign I may even add some Astral Claws to the force and make it a Traitors Legion list out of the Badab Forgeworld Book 1.

You may notice one of the models here is not a GW model (don't tell anyone) but is instead one of the past Adepticon models which I've always wanted to paint and finally found the opportunity.  For now he'll serve as my Company Commander. 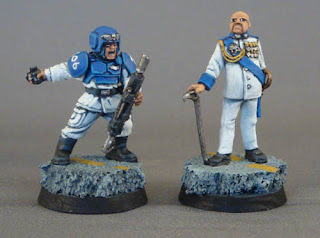 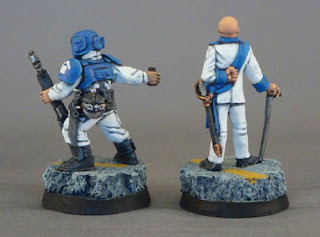